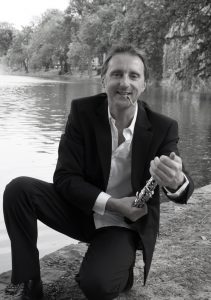 Sylvain Cremers is one of the most active and renowned oboists in the Belgian music scene. He has an extensive and intense musical record as Principal Oboe soloist for the Royal Philharmonic Orchestra of Liège (Belgium).

He continued with postgraduated studies at the “Musikhochschule” of Cologne as well as with Mr. Jean- Louis Capezzali in Paris.

Since 1994 and without interruption, he has held the position of first principal oboe of the Royal Philharmonic Orchestra of Liège. He has performed all over Europe, Asia and Latin America and playing with world-class conductors and top-level soloists.

He has made numerous recordings for CD as well as broadcast for TV Mezzo Live and Medici tv.

Sylvain Cremers collaborates with otherorchestras and ensembles such as the National Orchestra of Belgium, the Wallonia Chamber Orchestra, the Sinfonietta Köln, the Charlemagne Orchestra. He is also regularly invited to play at the prestigious “Queen Elisabeth International Competition of Belgium”, “Mozart Festival” etc.